Once Emotional Driving reached beyond the walls of Gonvarri and became a project open to all of society, new questions arose that needed to be answered. What does society think about road safety? What are the concerns of young people in particular when it comes to sitting behind the steering wheel? How can we effectively raise drivers’ awareness of the risks involved on the road? Through the activities carried out for Gonvarri’s employees, from road shows and live testimonials to web series, the fundamentals of the project and its striking results had become clear.

In other words, the key was in the approach: it was necessary to provide data, yes, but above all to transmit emotional experiences; and, moreover, it was preferable to avoid tragic or threatening messages and focus on sending positive, constructive, educational stimuli.

The Emotional Driving program reached Gonvarri’s drivers and become familiar to them. Their habits, their defects, their motivations. But what were the habits of the rest of the Spaniards? What are the most common distractions at the wheel? What motivates them to drive responsibly and safely? In order to find precise answers to these questions, beyond initial intuition, Gonvarri decided to reinforce its commitment to road safety and provide Emotional Driving with a powerful observation tool. In collaboration with Movistar, one of its most active partners, it has carried out various studies on the driving habits of the Spanish people, which have provided the most reliable possible picture of our behavior at the wheel. The main goal has been to determine which are the distractions in general, and in relation to mobile phone use in particular, that put our lives at risk. And by viewing ourselves in this revealing mirror, we become genuinely aware of our responsibility as drivers, towards ourselves and towards others. Because it is not only our lives that we put at stake, in this sort of Russian roulette on four wheels we also put at risk those who travel with us, and other drivers, and pedestrians…

The first of these studies, conducted in 2018, focused on young people as future drivers; and a second study extended the sample to the entire Spanish population. The results obtained are undeniably of enormous interest, for several reasons: they have allowed us to draw a reliable composite portrait of the Spanish person behind the wheel and they confirm that the strategy developed by Emotional Driving is correct (if we want to reduce the number of accidents on our roads, we must opt for campaigns that appeal to the emotional responsibility of drivers, and through positive messages). At the same time, these studies have forced us to broaden our view and detect new goals for the future.

These extremely revealing portraits have become a valuable and far-reaching asset for Emotional Driving. The data obtained allows us to understand how we drive and the nature of the wide variety of mistakes we make behind the wheel (consciously or unconsciously) and, very importantly, provides us with arguments to find real solutions. The impact that both studies have had on society, and the resulting media coverage, has been more than notable and has led Gonvarri to repeat the experience beyond Spain’s borders. In September 2019, a specific study was carried out for Argentina, with equally remarkable results, and today other countries in which Gonvarri is also present are being analyzed in order to repeat the experience. Without a doubt, it is a powerful tool that has proven to be fundamental for the future of Emotional Driving, and which opens up new paths to continue advancing firmly and safely towards Goal Zero.

STUDY I Profile of safe drivers

What profile of driver drives most prudently when they feel responsible for the people travelling with them? And out of fear of an accident? In general, it’s women. And the older and more educated they are, the more this sense of responsibility increases. On the other hand, drivers whose family is their motivation to drive more safely are aged between 27 and 30 years old and residents of large municipalities. Another type of safe driver are people who have received training or information on road safety after obtaining a driving license; these are usually young men, resident in medium-sized municipalities and with a high income level.

The initial data offered by this study provides a general outline of Spanish drivers: they are owners of a small car, which they use mainly in the city, both on working days and at weekends; almost half of the drivers claim a passenger regularly accompanies them in the vehicle and they drive on average between 10,000 and 20,000 kilometers per year in urban areas. The survey was carried out on more than 2,000 car drivers aged 18 to 65, resident in Spain. Analyzing the data in more depth, we observe some important variations. For example, while more than 60% of Spaniards drive both on weekdays and on weekends, 23.41% do so only during the week, and 15.48% only on weekends. On the other hand, the differences are smaller in terms of the kilometers driven per year and the place where they drive: 45.54% accumulate between 10,000 and 20,000 kilometers per year, but 31.65% drive less than 10,000, and 22.81% more than 20,000.

Argentina is a unique and interesting case in the field of road safety. In comparison with Spain, according to data from the road safety organizations of both countries, Argentina has significantly higher road accident figures than Spain: about 5,500 compared to just over 1,600 (in 2018). This is unquestionably worrying data and attracted the attention of Gonvarri, which has been present in Argentine territory for many years. The Spanish company, determined to take part in the cause, carried out a study similar to those carried out in our country and adapted to Argentine drivers. The survey gathered the opinion of 1,018 individuals, men and women, from 18 to 65 years old, representing all the provinces of the country. 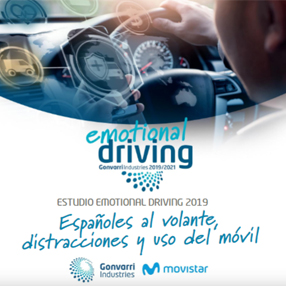