Emotional Driving was born five years ago as an innovative project that urges citizens to drive safely through positive and motivating  messages. It appeals to emotions and feelings; training, informing and raising awareness; and invites us all to reflect on a problem that is everyone’s responsibility. Over the course of these five years, Emotional Driving has had a profound effect on thousands of people, in Spain and other countries, and has achieved spectacular results. Results that have contributed to saving lives. That is the most important thing. The only important thing.

Road safety is an uncomfortable subject that we do not always want to broach. We are not always aware of our own behavior when we drive a car, in our everyday life. We do not think that any mistake, any act of recklessness, can have consequences, because we are not alone on the road, nor on the streets of our cities. And strangest of all, despite the amount of time we spend behind the wheel, we think we are invulnerable, we never think that we will have an accident; it is something that happens to others, it always affects others.

It is not a subject that concerns us. We just enjoy driving and hardly ever stop to consider the responsibility it entails, for us and for others. Arriving at our destination as soon as possible, yes, that does concern us, even if we are tired; checking and responding to the WhatsApp message while still behind the wheel, that is a priority. But we do not take into account the fact that mobile phones distract us while driving, that traffic accidents caused by an irresponsible use of mobile phones are rising steeply, scandalously so. We do not see the danger, because we are looking at the screen (“If you look at the mobile phone once in a while, you only look at the phone once in a while”, as the successful DGT campaign warns).

But the reality is there before us. The raw, terrible reality. And it tells us (in WHO figures) that every year nearly 1.3 million people in the world die in road accidents. That is like a Boeing 787 Dreamliner crashing every two hours. The equivalent of 5,200 airplane accidents a year. Can we imagine how our society would react to such a huge problem? It would be devastating, overwhelming. But to this dramatic reality we must still add a number as equally disturbing as the deaths, which affect many millions more people: the families of the victims, and the people who do not die in these accidents but suffer serious physical or psychological consequences. The WHO estimates that this figure may range from twenty to fifty million people. Almost as many as the entire population of Spain. A figure that cries out to us that yes, we are facing a serious public health problem. An epidemic that causes many, many deaths and affects millions of people around the planet.

The good news is that this epidemic has a vaccine. That many of these deaths and injuries are preventable. That the number of victims can be reduced to numbers previously unthinkable. The UN’s Goal Zero. Possible? Yes. But action must be taken. In all countries and from all walks of life: governments, businesses, institutions, non-profit organizations, civil society, individuals. Fasten your seat belt and set out on the road with conviction, intelligence and conscience.

At Gonvarri we have already come a long way. We are well aware of this overwhelming reality  and concern for road safety has always been a concern for us, as a company and as individuals. As a company, because it is an essential part of our business activity; and as people, because 78% of our workers use their cars for at least two journeys a day to get to work. Two important reasons that five years ago led us to take on board, in a decisive manner, the need to promote road safety among our people, to develop an awareness program on safe driving, with priority given to prevention.

A program for all drivers

Between 2015 and 2016, the Emotional Driving program focused on Gonvarri’s workers. From the first experience at the Madrid facilities, the leap was soon made to all the factories in Spain and then to other countries, both in Europe and America. The key to this rapid expansion throughout the world was the enormous acceptance and united involvement of the company’s workers, who committed themselves to the project almost unanimously from the outset. And with great enthusiasm, too.

The participation rate confirms something that is fundamental to the project and which has become one of the added values of Emotional Driving: the response of Gonvarri’s workers. After participating in the program, and even before, all of them became aware of the importance of responsible driving (the goal of the project) but, in addition, their enthusiasm and active involvement as representatives of the program demonstrated that it was a project destined to spread beyond the limits of the company and expand throughout society. We wanted to take the initiative further, to embody our philosophy of prevention and safety outside the plants and the company, to make it a reality in the daily lives of all citizens.

Thus, from 2016 onwards, the program began to be projected in different areas, a process in which the role of Gonvarri’s employees has been fundamental. They have been the true ambassadors of the project, the spokespeople who have conveyed the message to their families, their friends, and their closest surroundings. And from there, to society in general.

One of the keys to Emotional Driving’s success in and out of Gonvarri is the project’s honesty and realism. This is a program that has really been created for society. CSR is full of varied and creative motives, because of the need for companies to show their solidarity. But in the case of Emotional Driving everything is real: we work for Road Safety with our products; we want to take care of our people, and Road Safety is a real risk that affects them; our people see it and believe it; it is our people who participate in our campaigns; and the results achieved are also real. They are not statistics, they are lives.

Francisco Riberas Pampliega founded this company 60 years ago. An extraordinary person, who really cared about creating jobs, and who really cared about his people. That spirit is what has brought the company to where it is today, doing things right, doing good (Doing well by doing Good). With honesty. With coherence. By truly believing in what we do. And that is what also defines Emotional Driving, a project that is for real.

The final balance of these five years of Emotional Driving’s life is positive, hopeful and very gratifying to all of us who have been part of the project. What began as a modest initiative for the workers of the Gonvarri headquarters in Madrid, reaches today many thousands of people all over the world. Our workers have become ambassadors of responsible driving, and in addition, awareness raising campaigns have been introduced in schools, and are experienced with conviction by young people and road professionals. We do not know how many accidents have been avoided in all this time, the data does not exist, but what is an unquestionable fact is that Emotional Driving has had a very positive impact on employees and society in general. It has made them think that now, when they are in their car on their way home, or they are on a trip, the important thing is to arrive safely and hug their loved ones. And, without a doubt, this contributes to making society a little better. That is the true metric of the social profitability of a project like Emotional Driving. And it is what drives us to continue working every day to reach more people, more consciences. 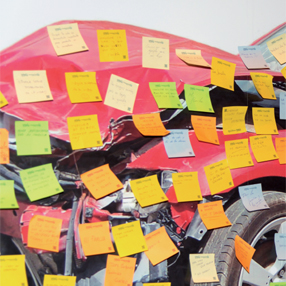 Five years on the road