The driver
A positive experience

«A woman was killed and another nine people were injured when a trailer truck crashed into seven cars on the M-50. It was the most serious accident in the region during the [city’s] first exit operation of the summer.»

«A woman was killed and another nine people were injured when a trailer truck crashed into seven cars on the M-50. It was the most serious accident in the region during the [city’s] first exit operation of the summer.»

When you read a headline like this one in the newspapers, you automatically think only other people suffer such tragedies, you never think you’ll be the subject of the news. Unfortunately, however, that headline referred to me.

On that Friday, July 2, 2010, in the middle of the exit operation, I finished my workday just like I did on any other Friday. I was seven months pregnant and very thrilled because my preparation classes for the birth started precisely on that day. I headed home, as always, on the M-50. I saw that a traffic jam was beginning to form; typical, I thought. I slowed down and stopped the car, warning the vehicle behind me. Suddenly, looking to one side, I saw pieces of a car flying through the air and as I saw the pieces flying I heard how cars were smashing one against another. Eight or nine impacts. Terrible smashes. All I could do was think, “For the love of God, I’m pregnant!”, because my car was also being hit. The last hit, the last smash, was tremendous… And suddenly, everything stopped, there was absolute silence.

I was also paralyzed, terrified. The first thing I did was to check to see if my belly was bleeding. Then I got out of the car and found an enormous truck almost on top of me, which had completely ripped off the front end of the car. I remember I looked around me and saw only destroyed vehicles everywhere. And people screaming and crying, running without direction. A total chaos. It was like a film. Without being able to stop myself, I began to cry.

The accident was caused by a car that tried to cut into a lane and was left sideways; when the truck arrived it could barely brake – we were all stationary –; the truck flipped onto its side and crashed into all of the cars in front of it. The car in front of me was under the truck’s bumper; the driver was evacuated by helicopter. The car that caused the accident was the worst hit: the passenger died and the driver was left disabled. From what I read later, I know many people were injured, some seriously. My car crashed into a lamppost, my side was intact, the other side destroyed, as was the front end. I had a splendid guardian angel and was very lucky.

I was in shock. I attempted to reach my husband while a confused stranger tried to take my mobile phone away from me. The ambulances arrived, as did the firemen (who were incredible, highly professional and considerate) and also my husband, Ricardo. In that extreme state of nerves, the only thing it occurred to me to say to him was, “You’re going to kill me, I’ve wrecked the car. Although, it wasn’t my fault”. A surreal situation.

They took me to the hospital and did all kinds of tests. They told me everything was ok, that I’d been very lucky. But I didn’t believe them, because my daughter wasn’t moving. They told me it was nothing to worry about, it was normal, an effect of the shock, that she also had suffered. So they let me leave and I went home with a neck brace (the pregnancy seat belt saved my life, but left a cut on my neck). I still didn’t feel my daughter and began to get obsessed. This was added to by all the paperwork, the check-ups, the visits to the insurance company, the Guardia Civil who called for me to testify… A big ball of feelings developed, accentuated by the pregnancy. I had a lot of problems sleeping – I had nightmares, I heard the sirens at night – and had to seek psychological assistance.

I was, of course, absolutely unable to drive. And every time I got into a car (which was almost every day, to go to the doctor, the insurance company, the psychologist…) I cried from the stress. I was terrified, I thought we were going to have an accident at any moment (in this respect, I must be grateful for my husband’s infinite patience). And, furthermore, it was a month before I could feel my daughter, Paula, who remained under the affects of the shock. The only thing I wanted was to give birth, for the torture, anguish and fear to end.

At last I gave birth and everything went well, but I didn’t dare drive with my daughter in the car. My husband took me to work, but I was so full of anguish that, when I arrived, I got out crying and almost kissed the ground. Later, I learned that this is an illness called amaxophobia (fear of being in a car). It took me six months before I could sit behind the steering wheel.

My husband tried to encourage me to drive. On a Sunday, without cars, slowly… but I simply responded, “I can’t! I can’t!”. In the end, I mustered the strength and tried, for my daughter, for my job… But it wasn’t easy, there were moments when I just wanted to stop and get out of the car, even if I was in the middle of the road. My vision clouded up, my legs failed me. And I thought, “Come on, Sonia, continue a bit longer, do it for Paula”, and I continued a bit more, and a bit more… and so I arrived at work. I don’t know what I would have done without the support of my husband, my parents and siblings, my baby daughter. Without them, I wouldn’t have been able to do it. It’s in these situations that you realize how important your family is… and how important you are to them.

It was a year before I could turn on the radio, because I had to be so concentrated, so tense, that I would arrive and start crying, above all at first. It was a victory to arrive alone. And if it was a rainy or foggy day, self-control took over. I am a very positive person, but I had a very bad time. The important thing is that I decided not to give up. I had to fight, I couldn’t be such a burden on someone, my husband, who had always given me everything; it wasn’t fair to him or to anybody.

I now arrive very calmly to work, because the goal is to arrive. Five years have passed since the accident, but there are still situations that cause me stress when driving. I never drive during the holiday exit operations; when I do travel, I look for moments when there are few cars, I take all the safety precautions, seatbelts, turn signals, the child’s seat, I keep an exaggerated distance from other cars and if I’m traveling with Paula, I leave even more space… and even so, I still think other cars are going to crash into ours. 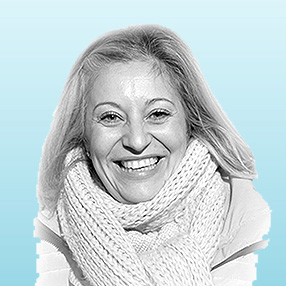