We touch, raise the awareness and educate the drivers of tomorrow so they may start their exciting journey behind the wheel responsibly and safely.

Emotional Driving’s work and commitment to raise awareness among our young people has been reflected in several of the initiatives and campaigns we have reviewed in previous chapters. But a very specific segment of these young people, those between 16 and 18 years old, required special attention. These preuniversity students are the drivers who in the very near future will be on the roads -or have just arrived on them- with all their inexperience and insecurity. The Emotional Driving program could not ignore this reality, so it devised an effective and impacting campaign aimed, in a very specific way, at the drivers of tomorrow. We live in a society immersed in a clear process of digitalization in which technology has taken on a special role in our daily lives and makes things easier. But at the same time, this technology can become a threat, especially at the wheel. This is a fact that was clearly demonstrated by the conclusions drawn from the study “Young people at the wheel, distractions and mobile phone use”, carried out by Emotional Driving and Movistar. Let’s remember: 8 out of 10 young Spaniards admit to having been distracted in some way at the wheel, either as drivers or passengers, which has put them in danger.

In light of this worrying scenario, Emotional Driving’s mission was clear. The focus of the campaign was to avoid distractions behind the wheel caused by mobile phone use, and also, as a reflective and motivating component, to highlight the many enjoyable moments life has in store for them at their age. The campaign was launched in 2018 and on this occasion Gonvarri joined forces with Movistar. The telephone company has long made an important commitment to new technologies, which have completely transformed our world; and, at the same time, it is very aware of the risks that this technology can cause at the wheel, a reality that it cannot, and does not want to, ignore. And to which it is firmly committed.

Life is too wonderful

One of the most impressive and extraordinary talks is given by Julio Garcés, a fireman who is an expert in traffic accidents. Julio does not appear on stage, but on the giant screen, because he has been forced to attend an emergency. By means of a small camera installed in his car, he addresses the audience live to tell his experience of 35 years as a firefighter. “From the age of seventeen I wanted to be a fireman and I started working to pass the exams. I had to take the theoretical exam, as well as physical tests. And…» At that very moment, all the spectators see Julio take a sudden swerve; he was distracted and had no time to react to an unexpected event. The screeching of the brakes warns us that something is not right, just before the screen goes completely black.

The audience is still recovering from the impact of watching a live accident when Julio Garcés, in person, appears on stage. He’s dressed in his firefighter’s uniform, and he quickly apologizes, “I’m sorry you had to experience that unfortunate moment.” Having shared this important message with a wink, he begins to tell his story again, now without risk of accident. He states that traffic accidents are what have most affected him in his profession; he has seen hundreds of lives cut short before their time. And this is what has prompted him to participate in the conference to tell this personally to young people, to remind them that life is wonderful. “Don’t lose your life for a WhatsApp message. Don’t lose it for a drink.” And he concludes his talk by calling the audience to action, encouraging them to raise their mobile phones and turn them off with a gesture while reminding them that “The best message, like the best driver, is the one that reaches its destination.”

You have a mission

Guzmán Fernández is a young actor and monologist who completely captures the attention of the audience of the What Really Matters Conferences. With humor and proximity, and a natural complicity, he talks with young people to make them aware of the great advantages that mobile phones have in their day-to-day life, but also how the use of these devices is incompatible with driving and involves many risks. In his talk, which has been given at conferences all over Spain, he reminds these thousands of young people of the importance of not being distracted behind the wheel and encourages them to follow Emotional Driving’s recommendation: “The best message, like the best driver, is the one that reaches its destination”. Finally, he takes advantage of the moment of engagement to give them homework: “You have a mission: to make sure everyone knows not to use their mobile phone in the car”. It’s not just a matter of listening, or even assimilating this idea, you also have to commit yourself to carrying it out.

I’ve observed that you have one life

The last protagonist of these surprising and impacting Emotional Driving talks is Frida, a humanoid robot with a great personality. Like Julio and Guzman, the robot reminds young people who attend conferences throughout Spain of the importance of not being distracted by their mobile phones and of keeping their five senses focused on the road when they’re behind the wheel. We only have one life, and the smart thing to do is not to risk it through a reckless act. This friendly robot also appeals to the feelings of humans, to our emotions, to make us think of a loved one who motivates us to drive safely. Like the previous protagonists of this “Emotional Driving moment”, the robot concludes its speech by telling all those present that “the best message, like the best driver, is the one that reaches its destination”. 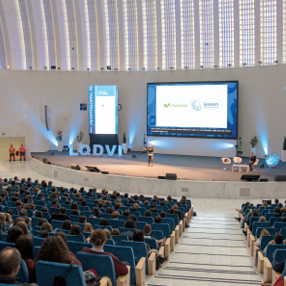