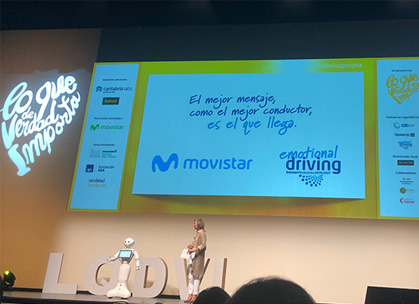 Successful return of Emotional Driving to What Really Matters Congresses

Sevilla hosted on October 11 the celebration of the second What Really Matters (WRM) Congress oy the year which took place at a crowded auditory of 3,000 people.

Attendees to the congress enjoyed with four distinguished speakers: Sara Andrés, due to an accident lost her legs but this never stopped her from beginning a new life as athlete and World Paralympic Champion; Antonio Espinosa, AURA CEO, social company devoted to financing project for accessing drinking water; and Antonio Pampliega, journalist specialized in war who was kidnapped by Al Qaeda.

Emotional Driving had an outstanding presence in the Congress. WRM presented its new App, for Android and iOS, boosted by Emotional Driving and Heliocare. Thanks to it, over 10,000 people will have access to the Emotional Driving project, its sensitizing audiovisual campaigns and even to a challenge in which thousands of youngsters will write a message directed to their relatives for them to drive safe.