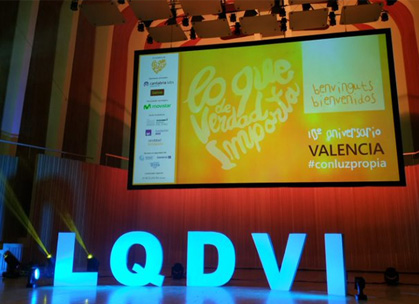 A new What Really Matters Congress took place on October 11 at Palau de les Arts in Valencia before 1,500 attendees.

Employees of Gonvarri Valencia enjoyed with three different talks: Kennet Iloabuchi, Nigerian emigrant who after three of mafias delusions made it to Spain and started working successfully; Jorge Font, water skiing world champion at the age of 19, suffered an accident that left him quadriplegic; and the main players of the award-winning movie “Campeones” that gave visibility to intellectual disabilities.

In line with the digitalization and technologic transformation strategy that the company is facing, Emotional Driving presented an innovative way of transmitting its road safety message. In partnership with Movistar, Emotional Driving presented Frida, a humanoid robot that will raise awareness on road safety among thousands of youngsters around Spain. Frida emphasized the importance of not distracting when driving and using all five senses on the road as part a responsible behavior at the wheel. In addition, called upon feeling that differentiate humans from robots, to remember somebody we love in order to motivate us to drive safe. Frida concluded her appearance by stating “the best message, as the best driver, is the one that reaches its destination“.